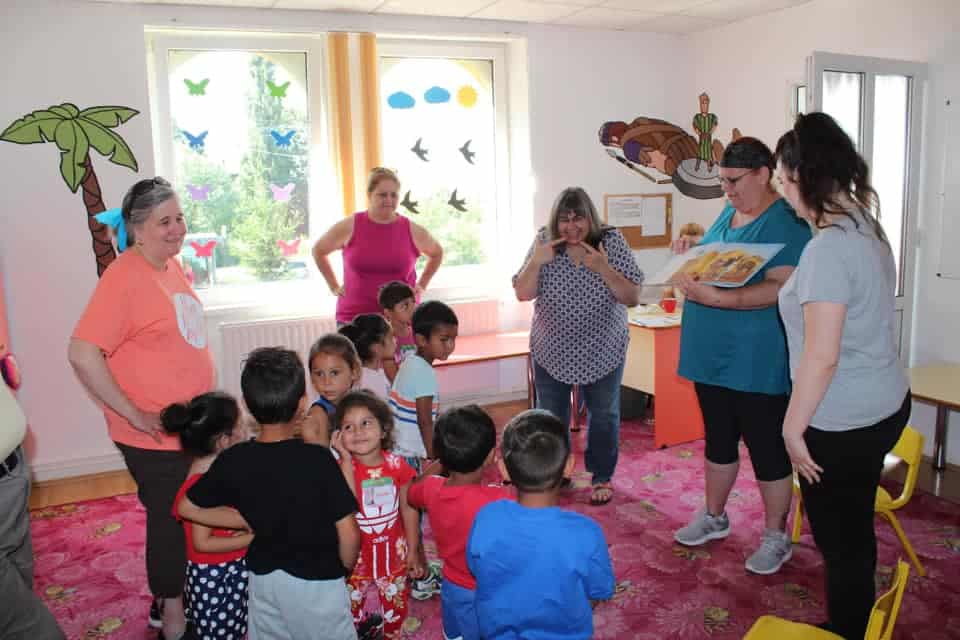 The Point of Hope Development Center (POH) is located in Tarneveni, Romania. The school helps educate 120 children on a daily basis. This school was designed to meet the needs of this Roma community. The typical child who attends the POH comes from a very poor and under-served family. The school provides many essential services:

The POH has 3 different programs that operate on a daily basis at the site.

After-school Program– children that attend the local public school (grades 1st-4th) will come to the POH at 12:30 for lunch. The kids will then do their homework under the careful eye of a teaching assistant. Kids will also have time to do other fun activities and have Bible teaching.

Before-school Program– children in the 5th through 8th grades come to the POH at 8:30 am. Kids will start the day with a hot breakfast followed by time to do their homework. These older kids will also have the opportunity to spend time in the life-skill development rooms before heading to the public school at 1:00.

The program is operated by Fundatia Buckner. They have been operating in Romania since 1997. Another Child Foundation partners with Fundatia Buckner by funding a large portion of the operating costs at the Point of Hope Development Center.

To support the ongoing work being done at the Point of Hope Development Center in Tarneveni, Romania all you have to do is click the Become a Voice Partner image at the bottom of this page.

During the Second World War Jews and Gypsies from Romania were deported and murdered. In 1965 Nicolae Ceausescu became ruler of Romania. Although Ceausescu had an independent foreign policy he ruled Romania with a rod of iron. Ceausescu was determined to increase heavy industry in Romania but ordinary people suffered abject poverty. They also suffered terrible repression.

The Communist regime in Romania suddenly collapsed in 1989. In December demonstrations took place in Timisoara. On 21 December Ceausescu was booed by a crowd in Bucharest and demonstrations followed. The next day Ceausescu appeared on the balcony of the Central Committee Building but he was forced to escape by helicopter. Ceausescu’s fellow Communists deserted him and he was arrested. He and his wife were shot on 25 December 1989.

Romania then faced a difficult transition from Communism to democracy and a market economy. Romania joined NATO in 2004. Romania also joined the EU in 2007. Romania suffered badly in the recession of 2009. However, Romania recovered from 2011. Today the economy is growing steadily. Today the population of Romania is 21.5 million.

Romania is a secular state and has no state religion. An overwhelming majority of the population identify themselves as Christians. At the country’s 2011 census, 81.0% of respondents identified as Orthodox Christians belonging to the Romanian Orthodox Church. Other denominations include Protestantism (6.2%), Roman Catholicism (4.3%), and Greek Catholicism (0.8%). From the remaining population, 195,569 people belong to other Christian denominations or have another religion, which includes 64,337 Muslims (mostly of Turkish and Tatar ethnicity) and 3,519 Jewish (Jews once constituted 4% of the Romanian population—728,115 persons in the 1930 census). Moreover, 39,660 people have no religion or are atheist, whilst the religion of the rest is unknown.

Romania’s political framework is a semi-presidential representative democratic republic where the Prime Minister is the head of government while the President represents the country internationally, signs some decrees, approves laws promulgated by parliament and nominations as head of state. Romania has a multi-party system, with legislative power vested in the government and the two chambers of Parliament: the Chamber of Deputies and the Senate. The judiciary is independent of the executive and the legislature. The Economist Intelligence Unit rated Romania as a “flawed democracy” in 2016.