The Faces of Hope 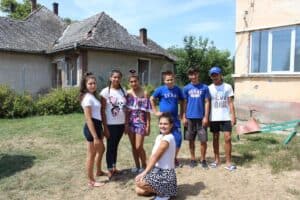 Thank you to Jan Larson for today’s guest post about her love for the children at Point of Hope.

When the picture of these seven graduates appeared on my newsfeed, I cried with joy.

These are some of the young people whom I have had the privilege to see grow up at Point of Hope over the years I have served with ACF. Five of the seven young men and women are as familiar to me as the children in my own congregation; the other two are more recent friends.

Mircea and Rares were introduced to me on my first trip in 2010. Mircea’s picture and family “bio” was sent to me prior to our visit so when I met him there was an immediate connection.

While I was not his official sponsor, the funds our family provided monthly helped build the program at POH which, in turn, provided support for Mircea and his family. I also met Mircea’s mother and was able to encourage her in parenting. Last year when I served at POH I took my photo album of pictures that I had collected over the years of these young people and watched how excited they were to see how much they had changed.

Rares, Mircea, Larisa and Alexandra were proud to report to me that they were doing well in school and were looking forward to their future. It was amazing to hear their hopes and dreams when there once was a time where they would not have had the same sense of hope in the future. Point of Hope has given them the confidence and skills to dare to dream of a future.

After my first trip to Point of Hope with ACF I had written in my journal: “How do we instill a sense of hope in children who are surrounded by such poverty and discrimination?” The answer is to provide them with loving care and encouragement as well as to introduce them to the source of all hope, Jesus Christ.

Years of VBS through mission teams and a dedicated staff who serve these young people on a daily basis have shown them what the face of hope looks like- LOVE.