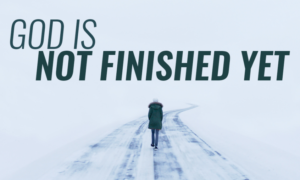 “Is God done?”  You may not have asked this question out loud.  But If you’re like me, you’ve thought it.  The list of everything 2020 has delivered would make anyone question, “Is God done?”

We picture God like an exhausted parent at the end of a long day, collapsing on the couch, “I’m done.”  Some believe this is the moment where he withdraws his hand of blessing and protection and turns to the person on his right and says, “it’s time.”

“Jesus come quickly”, have been the words formed by my frequent exhales as I watch current events unfold.

I was reading in Genesis 6, “The Lord saw that the wickedness of man was great in the earth…And the Lord was sorry that he had made man on the earth, and it grieved him to his heart.  So the Lord said, ‘I will blot out man whom I have created…’”[1]

I don’t know about you, but my first thought after reading this is, “Really?”  We’re only 6 chapters in to the whole Bible and mankind has blown it so bad that the Creator of the universe is ‘sorry he made’ us?  Come on guys! We’re better than this!”  But we’re not. That’s why I love the next part.  Verse 8, “But Noah found favor in the eyes of the Lord.”

You see, everything between the grief of God in this Genesis 6 moment and love of God in the back half of scripture[2], is held together by a heart of God that isn’t done.

But Jesus… “who, though he was in the form of God, did not count equality with God a thing to be grasped, but made himself nothing…he humbled himself by becoming obedient to… death on a cross.[3]”

It may be finished[4], but he is not done.  His sacrifice was too great, hell is too real and eternity is too long for us to sit back and reflect on the “Good old days”.  God is not done. So neither are we.