I Met My Sponsored Child! 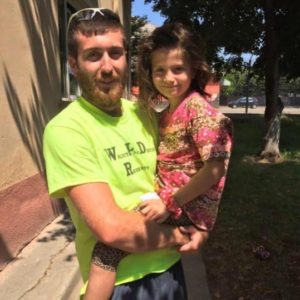 Three years ago, Brett Kepner saw a familiar face on an Another Child Foundation sponsorship card. It was 9-year old Sorina Todor, who he had met three years earlier on a Mission Trip to Romania.

“When I saw her face on one of the sponsorship cards, I picked her out because I had already formed a bond with her,” Kepner said. Brett met Sorina when he interned for ACF. He spent four weeks in Romania that year as as a recreational coordinator.

“I formed a good relationship with the students at Point of Hope,” Kepner said.

Brett has visited Point of Hope a total of four times, and cherishes the interactions he’s had with Sorina and the other children on his visits. He stays in touch with Sorina by writing to her occasionally.

Not everyone gets to meet their sponsor child. Kepner considers himself fortunate to have done that.

“I also got to further my relationship with some of the orphan children at the camp this year and improved my friendship with a girl that showed me that God’s love transcends all barriers,” he said. “That will forever stick with me.”

“Child Sponsorship is an important part of being involved with the ministry of Another Child. We love to see our donors get personally involved in a child’s life”, says ACF Director Tim Oloffson. He goes on to say, “people who invest prayer as well as financial resources to these children benefit greatly.”

If you would like to learn more about sponsoring a child with ACF click the button below to get involved!